ILFORD  5½-2½  BRENTWOOD I – exactly the same score as when we won at their place before Christmas.

Ilford did not find it all plain sailing, though Brentwood gifted us a point start by defaulting board 8. Only Leonardo had a relatively easy win, playing the Caro-Kann, two knights variation. Leo got on top of Ellis’s weak opening, quickly gained a positional advantage, won a Rook for Bishop, and then Ellis overlooked that Leo’s  pawn could take his Queen- which Leonardo did.

From there on it got trickier, and we did very well to halve the top three boards. Neville got out of his sick bed to come down from Harlow to hold off Adam Raoof. He managed to equalize the position in the French Defense Winawer Variation, though perhaps with best play Adam might have won (See picture of Board). Likewise Tom Barton had to play carefully to develop his pieces and push Gavin Strachan back. Anthony Kent flirted with the Birds Opening, but he too couldn’t make any headway against Kingsley, so a third draw was agreed.

In a good position Kalinsky lost a piece away, and so it was up to the tail to wag- and wag it did. Jef wriggled out of a poor Dutch defence and on just getting level, he offered a draw. Still with a good positon Rob Davies declined- only to blunder a few moves later when Jef trapped a Bishop. Jason always had the edge over Johnson’s Latvian Gambit, and his superior development paid dividends, and so we cleaned up the bottom four boards.

And to cap it all and make a rainy night worse- it never just rains but it pours – Rob Davies suffered a flat car tyre and had to wait for the AA.

The final score is a bit flattering but we are not complaining. This win keeps us top with 9 points from 6 matches 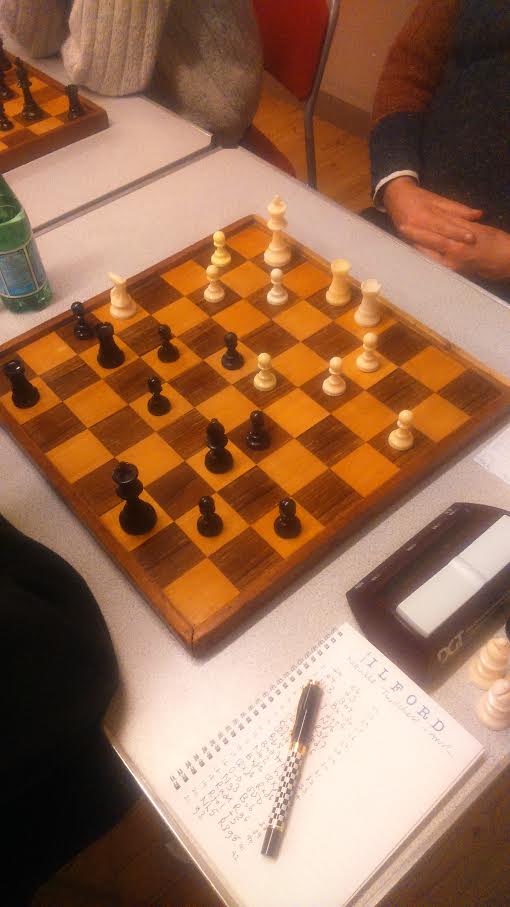