(From Jef’s notes). Not our best evening at the seaside having arrived a man short. We were always behind in the match, though there was an excellent win from Grant Gericke.
Leonardo lost a knight very quickly and was soon lost, but Neville had Grist on the ropes. But from there on it all went somewhat pear-shaped for Ilford. Jef wriggled out of Westrap’s attack and put in a fierce counter-attack getting both Queen and Rook to the 7th. Unfortunately, he could not quite find the right moves as time ran out. Then, Neville lost his grip on Grist’s position and blundered away the endgame. Pelling likewise could not hold a Bishop and pawns ending.

Syd did well to stay level with Shaw whilst Neil Sutherland lost a Rook for a Bishop and the game against Tom Barton’s Sicilian opening. Grant won a Knight against Wedlock and then Gericke’s own 2 Knights & Queen hopped over the board to checkmate Wedlock.

This now leave Southend with a clear blue water for a run at winning division 2 and promotion to the top flight.

Ilford all at sea. 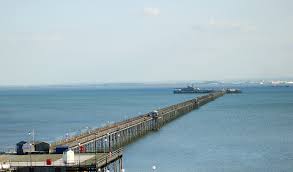